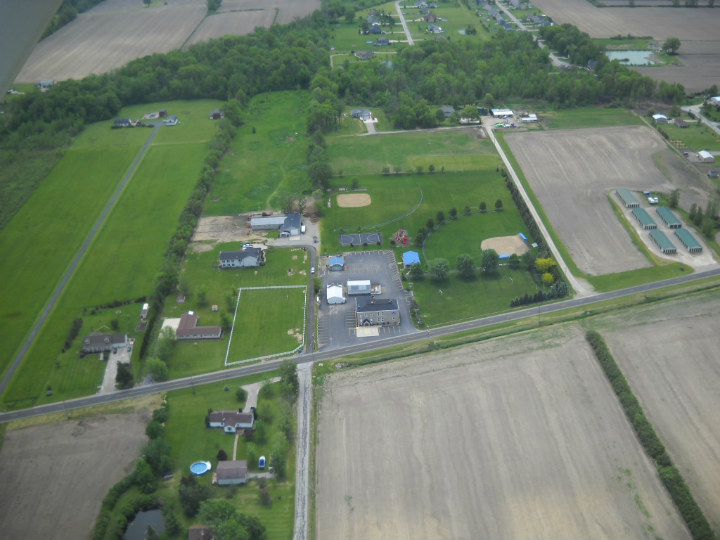 Danbury Township encompasses are area of 17.76 square miles which includes 32.75 miles of Lake Erie, Sandusky Bay and Harbor shoreline. The historic Village of Marblehead is located at the east end of the Township. The permanent population of Danbury is 4,264 with an additional 903 residing in the Village. Seasonal homes, condominiums, marina, campgrounds, cottages and recreational vehicle parks are home to a population of several thousand summer-only residents. Danbury was named for the original settlers who arrived from Danbury, Connecticut and became a township on March 6, 1840. The Village of Marblehead was incorporated in 1891.

"The Mission of the Danbury Township Board of Trustees is to provide fair and representative government for all citizens, to foster pride in the community, to ensure fiscal solvency, to preserve and protect natural and historical sites, and to operate within the parameters of the laws of the State of Ohio while making certain that the Township remains an enjoyable place to live for both permanent and seasonal residents."

We'll be using this section to post the most current information we need to communicate in a timely manner. As always, if you need to reach any of us just refer to the Contact Information.

This is for residents only, not contractors.

Rules & Regulations that remain the same:

Danbury Township is proposing a major rezoning of over 700 residential parcels in 12 general areas. The Township over the spring and summer studied multiple neighborhoods that are zoned “R-C” Recreational Commercial and whether they should be more appropriately rezoned to “R-3” High Density Residential.

The State statute requires essentially a 3-step hearing process. The first hearing will be held September 21, 2021 at 7:00p.m. before the Ottawa County Regional Planning Commission in the EOC room in the basement of the Courthouse. Their decision is a recommendation to the Township. The second hearing is scheduled for 6:30p.m. on October 6, 2021 before the Township Zoning Commission at the Township Hall. Their decision is also a recommendation to the Board of Trustees, who have final say in the changes and whether they should be adopted. The Trustee hearing date has not officially been set yet, but will likely be held November 10, 2021 prior to the start of their regular meeting time. An announcement will be made once that hearing date is set. Thirty days after the Trustee’s decision, if approved, the changes would become effective.

The brush drop-off site is now open and is located at 310 S. Bridge Road (SR 269 South) behind the dog park. For your safety, the brush area is not to be used after dusk. Until the end of May we will accept loose leaves or leaves in biodegradable bags.

Rule Reminders:
No Grass Clippings
No Rootballs or Stumps
No Plastic Bags (paper yard bags are okay to leave behind)
No Contractors
No Dumping after Dusk

This is for residents of the Township. Please only bring leaves and tree limbs. Hay bales are acceptable, but please make sure they are broken apart and take the twine string with you. Plastic and string get tied up in the machinery when it's time to mulch it.

FEMA is preparing new Flood Insurance Rate Maps (FIRMs) for Ottawa and the surrounding Counties. Ottawa County adopted the current FIRM maps in 2015. These proposed new maps would replace the 2015 maps. FEMA anticipates that the new maps will be effective by the Winter of 2022/2023.

FEMA does have a Flood Map Change Viewer available. In the top left hand corner of the map, you can enter your address and it will zoom into the property and general area. There is a 'Geoprocessing' box that will also be on the screen. In this box, there is a white box with a black pin point tool. Click on that tool and then click on your property. Once you have done this, back in the 'Geoprocessing' box there is a 'Run' button. This will run a report which will then bring up a web link. Click on the weblink and it will then show a side-by-side, single page, printable report and summary on how the property is currently classified (Effective) and what the new proposed changes (Preliminary) are for the property.

The Danbury Township Police Department will resume accepting documents for secure shredding and and prescription drop-off services at the Police Station on SR 269. This is by appointment only to ensure an officer is present to place the items in the proper secure location. The direct number for the station is (419) 732-2549.

The Northwest Ohio, Toledo office is in dire need of volunteers within their 14 County Region. They are in need of volunteer blood donor ambassadors, disaster team members, multi-speaking language volunteers, shelter support, community volunteer leaders, people to transport blood, among many other volunteer positions.  They also need blood donors as there is a severe shortage.

Some specific needs they have:

For more information visit www.redcross.org/volunteer or contact Kevin Brooks at Kevin.Brooks3@redcross.org or 419-261-6277.

Our recycle area at 419 Bridge Road continues to be a source of frustration and concern for both Danbury Township and the Solid Waste District. We sadly found it necessary to have video surveillance due to the abuse of the area with non-recyclables (including a vacuum cleaner, table and chairs, dishwasher, mattress and numerous other trash items). It’s a great service for residents when it is used properly – and it is for residential use only. Unfortunately we have also found that a primary reason the dumpsters are overflowing so quickly is due to heavy use by businesses. This was never meant to be a service for businesses or contractors. Now it is interfering with residents being able to utilize the service. The Solid Waste District advised that if a business wishes to recycle they can make arrangements with Waste Management by calling or emailing Matthew Leis (248) 285-0330 mleis@wm.com or Republic Services by calling (800) 234-3429.

We are asking that businesses voluntarily STOP using the residential recycling area. If you know of a business that does not utilize Facebook, please help make them aware of this information. We don’t want to eliminate recycling or brush drop-off but the abuse at both areas has become overwhelming for our employees. Please help us to help you keep these services and do not ever hesitate to contact the police at (419) 732-2549 to report abuse of our services.

It is the policy of the Danbury Trustees to not accept anonymous complaints regarding tall grass, junk vehicles or other nuisance concerns. A written complaint regarding issues within 500 feet of your property will be accepted and reviewed to determine what action may be taken. In the blue band above, please go to Departments, then Zoning and the tab about "Violations" for more information and to print out a complaint form. 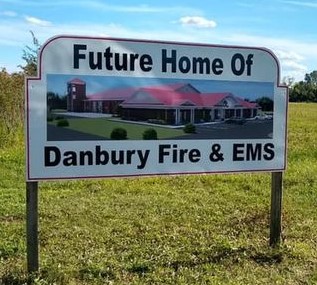 Located at 7870 E. Harbor Road near Dollar General will be the location of a new Centralized Fire & EMS Station and Training Facility. The property consists of nearly 7 acres. More information will be updated here on the Township Website as it becomes available. To see some preliminary and conceptual plans for the new building, please click here.

The Ottawa County Sheriff's Office has launched a mobile app. It is a free app available for both Android and Apple users. Their hope is to improve communication with the public. Thru the app, users can receive notifications of snow levels, major traffic accidents or detours, missing people or other warnings of potential danger. Features on the app, include the jail roster, sex offender registry, contact information for sheriff’s divisions, submitting tips, links to other law enforcement websites and more.

We encourage you to sign up to the Ottawa County Emergency Alerts WENS system. In the event of an emergency or severe weather condition, a text message will be sent to the mobile number and/or your email address that you specify. This is a free service provided by Ottawa County, Ohio.
To receive alerts, please click here to sign-up.

In 2019, the Danbury Township Police Department will celebrate 50 years of dedicated service to our community. Each member of the department was issued a 50th Anniversary badge to wear proudly on their uniform. The members of our department are committed to making sure that Danbury Township continues to be a safe place to live and enjoy. 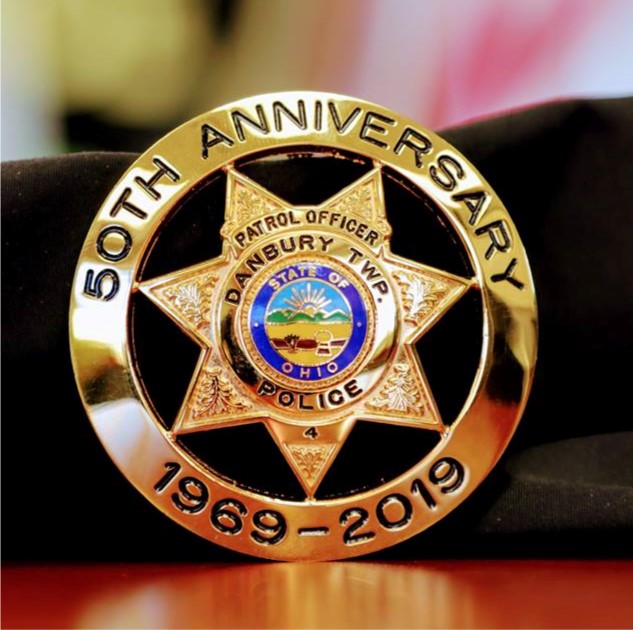 The Township has began accepting reservations for Lake Point Park shelter house, but for a fee. It will continue to be open to the public daily unless otherwise posted as reserved. The cost to reserve the shelter house is $300. All reservations must be received by the first of the month of the month prior to the event  (i.e. July events, reservations must be made by June 1st). Reservations are on a first come, first serve bases and the date is not officially reserved until a complete reservation form and payment has been turned in. Once a reservation has been made, the party will have the shelter house reserved for them the entire day. We do not reserve more than one event per day. Attendee's are asked to clean up after themselves and wrap up all activities by dusk. Reservation forms are available under the Service & Maintenance Departments web page or at the zoning office during their office hours.

The Zoning Commission meets the 1st Wednesday of each month at 6:30p.m. and is responsible for amendments to the zoning resolution and map. The Commission is comprised of 5 regular members and 2 alternates. An appointment is for 5 years, unless fulfilling a vacated seat.

The Board of Zoning Appeals meets the 3rd Wednesday of each month at 6:30p.m. and is responsible for hearing requests on Appeals, Area Variances, Conditional Uses and Special Exceptions. The Board is comprised of 5 regular members and 2 alternates. An appointment is for 5 years, unless fulfilling a vacated seat.

To be considered for either position, your permanent residence of record must be Danbury Township. Applications will be accepted until the positions are filled.

For more information regarding Rainbow Ridge at Meadowbrook Marsh in memory of the 10 animals that perished in a barn fire Thanksgiving evening 2019 at African Safari Wildlife Park, please click on the "Community" link above in the blue band and then select the "Rainbow Ridge" button. 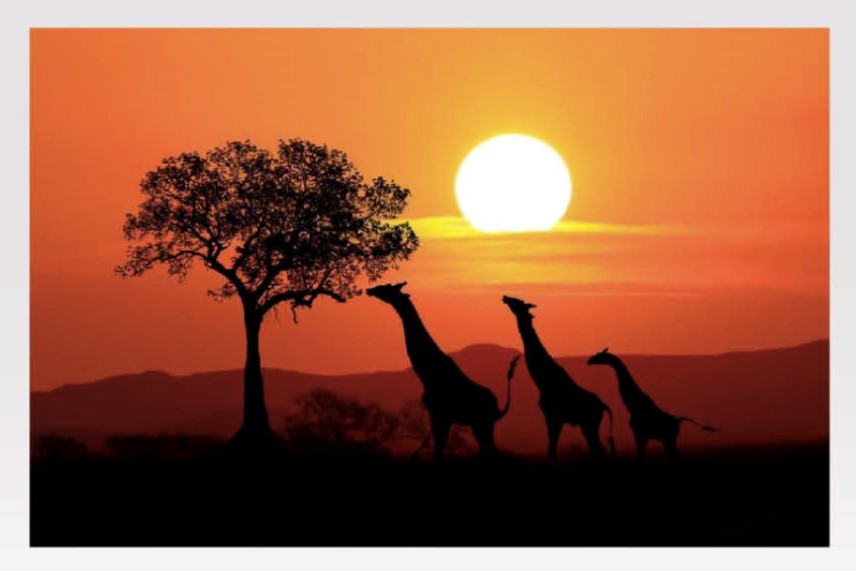 Board of Zoning Appeals

None at this time.

A copy of the application may be viewed at the office of the Zoning Inspector at Danbury Township Hall during normal business hours. The amendment may also be viewed at the Ottawa Regional Planning Commission office at the Ottawa County Courthouse or by clicking on the case information above. At the conclusion of said hearing and upon a decision made, the amendment will be submitted to the Danbury Township Board of Trustees for action.

None at this time. 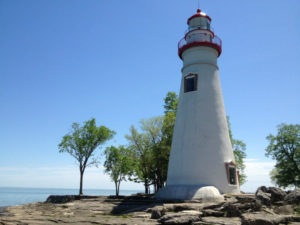